This summer we joined forces with Portsmouth Royal British Legion Victory Band who came up to join us in two concerts.  This came about as our 1st Baritone player is the sister of the Portsmouth Band's conductor Steve Yoxon.

The first concert was at Trinity Methodist Church, shown on the left in the heart of Ellesmere Port. Just click on the image to go to their website.

It was a very successful event, well attended by an enthusiastic audience. You can see some images from the concert below. Just click on them to see a zoomed out vesion.

Just click on the 'Joint Concert Video' image (in the middle or the top row below) to see a short (nine minutes) video of the event. 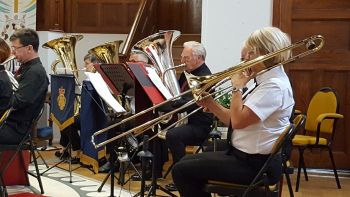 The hard working Trombones and Basses.

At my age two hours practice followed by a concert is too much!

Chris - our first baritone and also the sister of the conductor of the Portsmouth band.  She is to blame for us all being here.

An artistic shot of Kirsty's Euph, stand and music. 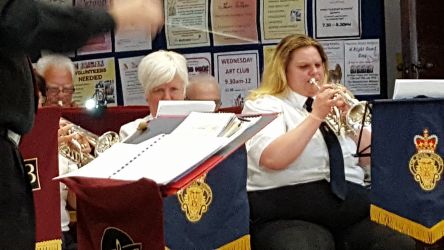 The even harder working(?) Cornets.